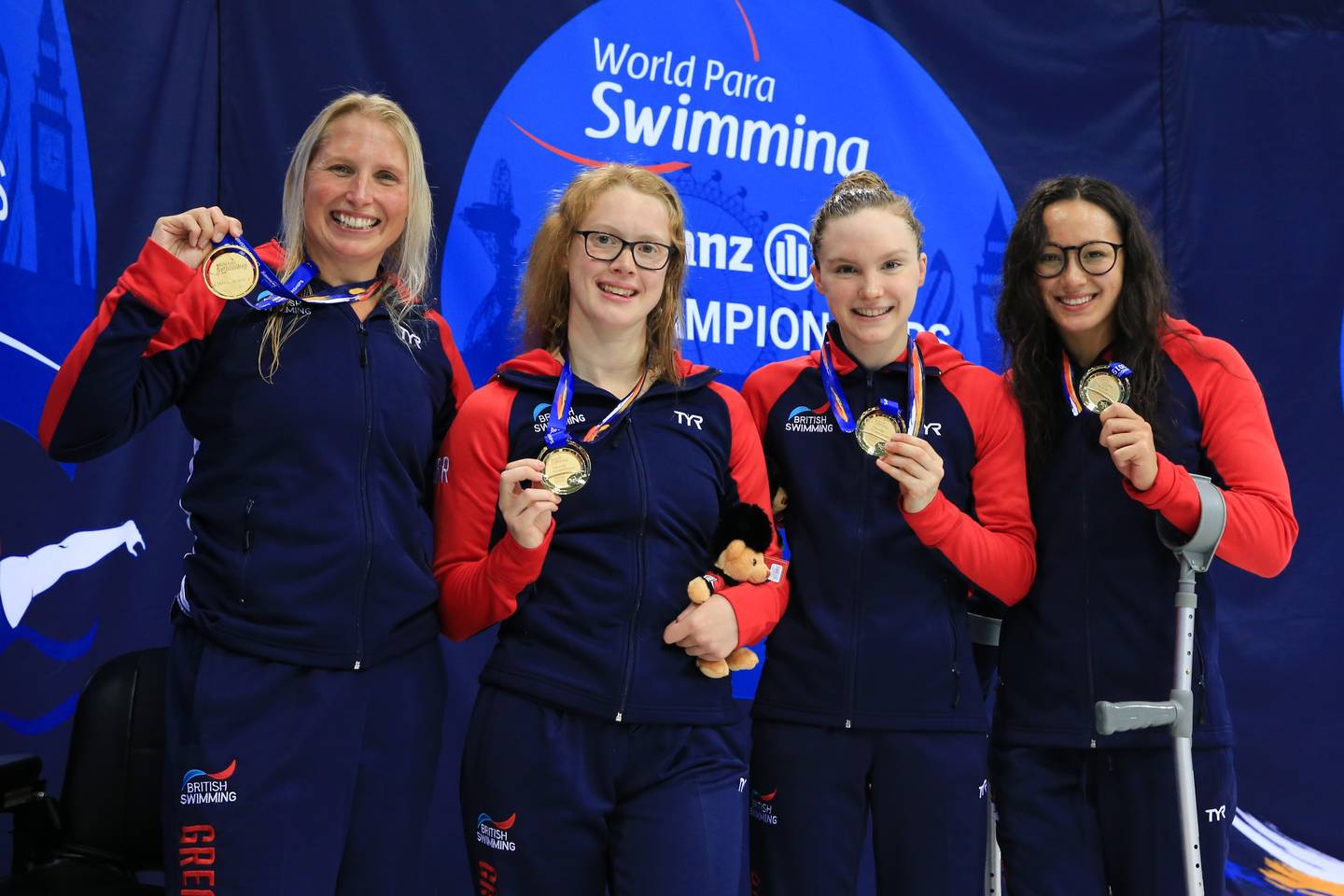 Reece Dunn scored his third gold medal of the Championships with a world record breaking performance in the S14 100m Butterfly final. Taking the field out from the off, Dunn powered ahead and by the half way point, victory never looked in doubt. Dunn took the crown in 54.46, lowering the previous world record by over a second, before slapping the water in delight.

Lawrence Sapp (USA) won silver in 56.96, while the holder of the previous world record, Dai Tokairin (JPN), won the bronze medal in 58.14. A delighted Dunn said of his performance:

“I’ve waited three and a half years for another 54. To post the fastest time for the event in three and a half years feels great.  It’s been a hard few months of training; the most I’ve trained for a long time and the most I’ve been motivated too, so I’m happy.  I must say a massive thanks to everyone for coming out and supporting us, it’s been very loud and very awesome, and the crowd have been amazing.”

Brock Whiston was also in world record breaking mode with another dominant performance, this time in the SB9 100m Breaststroke.

Whiston, who already has two gold medals to her name from these Championships, stormed to victory in a time of 1:13.83, with Paralympic champion Katarina Roxon (CAN) securing silver in 1:21.96, whilst European Champion, Ellen Keane (IRE) took bronze. Despite breaking her own world record, Whiston voiced her frustration with the time and said:

“I’m a little disappointed with the time, which I know sounds really bad, but you always want to go faster. I went a 1:12 split in the relay so to go a 1:13.8 here is a little bit gutting. I know it’s in me to do; it’s just about finding those areas to improve on.  You always want to find that little extra and be the best you can be in your sport. I’ll have a week out the pool then I’ll sit down with my coach and start putting plans together for Tokyo.”

Speaking about the week she’s had at the World Championships, she said:

“These are my first major Championships in what I think is the best pool in the world. It’s a home pool with a home crowd and it’s been absolutely amazing."

Tully Kearney also made it a hat-trick of gold medals with another strong performance in the S5 100 Freestyle final. Kearney finished in another Championship Record time of 1:17.83, with Arianna Talamona (ITA) taking silver in 1:22.49, whilst Kearney’s teammate Suzanna Hext took her second medal of the Championships, a bronze in a time of 1:22.80.

Kearney said of her performance:

“I wanted to get a bit closer to that world record but I really I can’t ask for any more. Three out of three isn’t bad at all. This gives me a lot of confidence going forward and I’m hoping to train through the whole of next season and see if I can make Tokyo and see what that might bring.”

Speaking about the capacity crowd who have attended the event, Kearney said:

“It’s been such an amazing Championships and it has been better than I could ever have imagined. The crowd have been amazing and helped pull me back in my 200. I was really struggling that last 50 and the noise of the crowd really helped. I want to thank everyone who pulled this event together so quickly. It’s amazing we actually got to compete in a World Championships this year and also for it to be in front of a home crowd.”

“I wasn’t feeling my best, so just to get through the race was a miracle. I’m over the moon to come to my first international swimming championships and win two medals. It’s exciting for the future and hopefully I’ll keep improving.”

Speaking about managing both equestrian and swimming, Hext continued:

“If my accident has taught me anything it’s to take every opportunity. Equestrian have been very supporting of my swimming and I feel very lucky they’ve worked well together as a team for me.”

Great Britain’s 34pt 4x100m Freestyle Relay team won a hard fought gold in the last race of the championship, a fitting end for the hosts. A quartet of Stephanie Millward, Brock Whiston, Toni Shaw and Alice Tai all swam superbly, with Tai moving up through the field in the final 100m to bring it home. A lengthy wait to confirm results had everyone nervous, but Great Britain were crowned champions in a time of 4:23.86. USA won silver in 4:24.60 with Canada picking up bronze in 4:30.09.

“I’m so happy to be part of this team and to swim with these three girls again is amazing. We proved what we’re made of in the medley relay and to do it again in the freestyle relay is fantastic.”

Alice Tai spoke of her outstanding week and said:

“I’m so happy to end the week this way, but now I’m ready to rest!”

“It’s been a crazy week - a great experience. To end it with that race and those girls is really special.”

Maisie Summers-Newton and Ellie Simmonds gave the capacity crowd plenty to cheer about early on in the evening, bringing home the silver and bronze medals in the SB6 100m Breaststroke final.

Daomin Liu (CHN) smashed through her own world record to take the gold in a time of 1:29.87, while Summers-Newton broke the European Record with a time of 1:33.46 for silver. Simmonds improved her personal best time again for the event, taking bronze in 1:38.22.

“Wednesday was brilliant and then today I wanted a PB. To get a European Record is great and I’m really happy. The first 50 I tried to keep up with her (Liu), she’s so strong and it’s an amazing result for her. I’m so happy with what I’ve achieved this week.”

“I can’t believe it; I’m normally terrible at breaststroke! This is just a fun event for me and I’m so shocked to get two PBs in one day. It will give me huge confidence going forward. When I didn’t get on the podium in the 200 IM I was feeling low afterwards, so to come here tonight and get a medal, I’m so chuffed.”

Jessica-Jane Applegate could not hide her emotions at losing her world record in the S14 100m Butterfly final, as despite swimming hard all the way it was Valeriia Shabalina of Russia who had the edge and took gold in a new world best time of 1:03.68. Applegate won silver in 1:04.26, while the bronze medal went to Yui Lam Chan (HKG) in a time of 1:06.45.

Applegate said of her race:

“I messed up my turn. I can’t blame anyone else but myself. I’m absolutely devastated at losing my world record but I’ve only got myself to blame. Between now and Tokyo I’ll definitely be working on those and my race strategy.”

Ellie Challis broke the SB2 100m Breaststroke Championship Record on her way to a fifth place finish in the SB3 Final. Challis said of her performance:

“I’m so pleased to get a PB and to get the Championship Record is amazing. We worked so hard in the warm up today, working on my rhythm which I really struggled with this morning. I wasn’t expecting that much of an improvement after a tiring week in London. The crowd have been amazing here; all my fellow athletes have been amazing as have all the coaches and staff working behind the scenes.”

Earlier in the night Toni Shaw also had a fifth place finish in the S9 50m Freestyle, recording a time of 30.19.

“Primarily we are very grateful that we even had a World Championships as five months ago we were staring down the barrel of a gun and not having any Worlds in this cycle, so we are eternally grateful for all the stakeholders, UK Sport, British Swimming, LLDC and the City of London for pulling this event together at such short notice.

“From a performance perspective I’m absolutely delighted with the way the team’s performed this week. We’ve very much focused on two things; one was the process of making sure we swam hard in the heats and moved those things on in finals and we’ve achieved the goals we set in that area. The other was very much ensuring we really rehearsed what we wanted to achieve and what we put in place for Tokyo in terms of the staffing model, how we’ve positioned ourselves and the culture we’ve had as a team is exactly what we’ve wanted to practice ahead of Tokyo. I’m delighted we’ve come away from these Championships with great performances and really grown together as a team over the last seven days.”

Full results from all seven days of action can be found on the Paralympic website. You can watch all the action back on Channel 4.