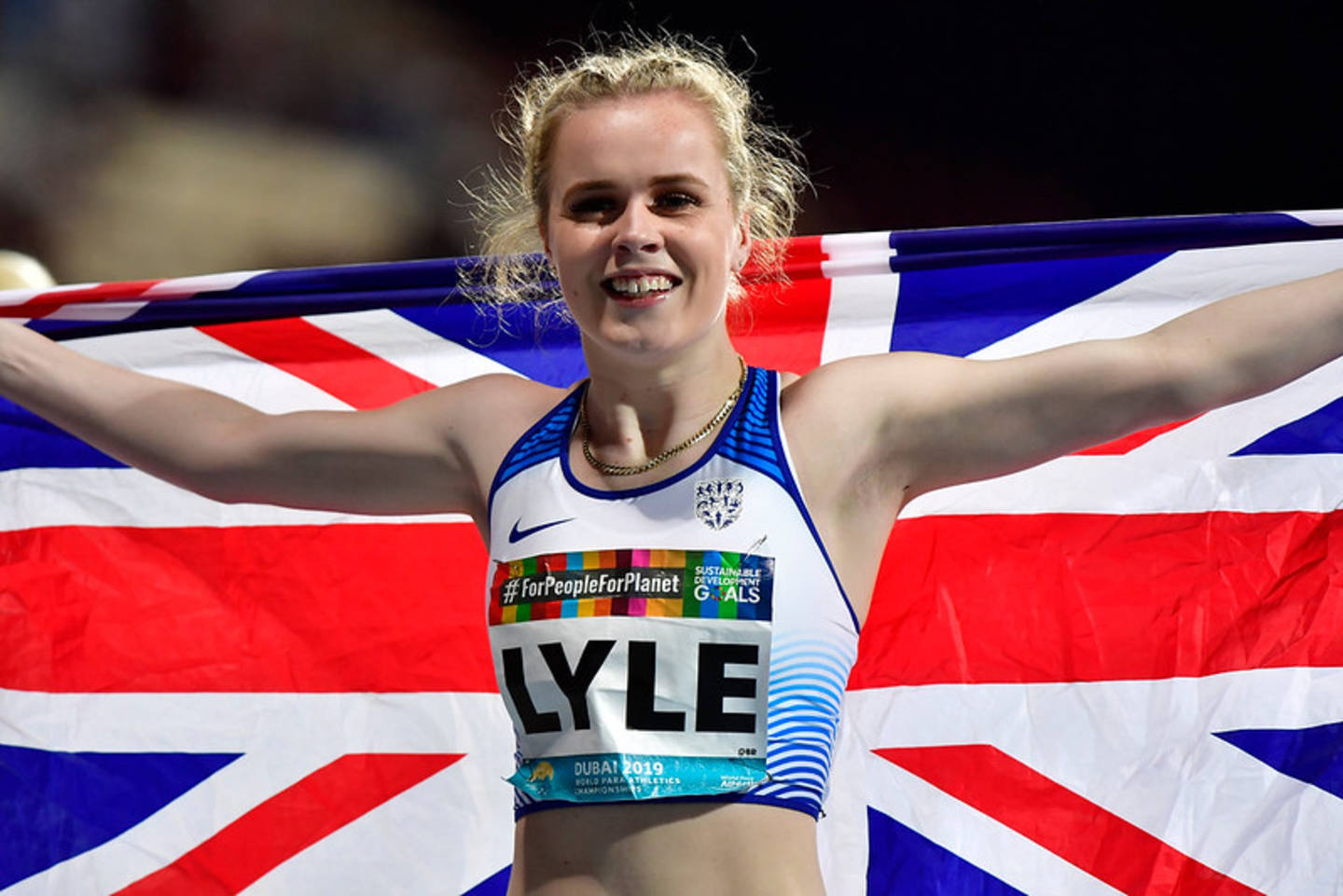 Lyle arrived in Dubai with six individual global medals to her name, all silver or bronze, but will now leave with two world golds after producing a great run to win the women’s T35 200m final in 30.33 (+1.5) and add to the 100m crown she won on Sunday.

All three of the British double gold medallists at these World Championships in Dubai are female with Lyle joining Sophie Hahn (Leon Baptiste; Charnwood) and Hannah Cockroft (Jennifer Banks; Halifax) in making two trips to the top of the podium.

Fortune meanwhile became the fifth British woman to be crowned world champion in Dubai – and did so in style with a last effort Championship record and huge personal best of 13.91m in a back and forth battle with Ukraine’s Anastasiia Mysnyk in the women’s shot put F20 final.

Lyle got off to a great start in her bid for a second gold in the T35 200m final and within ten metres had established a lead that would not be relinquished. She put daylight between herself and the rest of the field after the bend to win in a time of 30.33.

"I don’t think it’s really sunk in yet. I think it shows how far I have come from last year when I was depressed and suffering with lots of anxiety. I now enjoy life and enjoy training and racing. So, from that perspective, it’s a really good achievement for me.

"The main focus of the 2019 was to get to the world championships, not about medals, so to do that and get two gold medals is the icing on the cake. I’m so pleased to win my second gold and put together a good performance.

"I got out well and just tried not to tense and stay relaxed. I find the 200m a lot harder with my CP. I got to the line well and ran a good time. I was a bit nervous at the start as we were held a wee while, so I was just trying to focus on my race plan."

European champion Fortune has enjoyed a fine season, matching her 13.70m personal best, and after opening with efforts of 12.32m and 12.79m, she found her stride and threw a Championship record of 13.26m to take the lead in round three.

Mysnyk then threatened to upset Fortune’s charge with a 13.31m in round five and then a 13.48m in round six but the Brit showed immense composure to throw out to a huge personal best and final Championship record of 13.91m for gold.

Having finished sixth and fourth on her last two World Championship appearances with Paralympic bronze at Rio 2016 in between, Fortune said:

"I'm over the moon. There are no words to describe how amazing that moment was. I burst into tears straight after that final throw. And because I was last, it meant nobody could take it [the gold] off me.

"After two long long weeks of being here, I wanted to throw long. This is the best outcome I could ask for. This is one of the days I'll remember for the rest of my life. I'll probably end up crying again when I go onto the podium. It's a moment which will last forever."

Multiple Paralympic and world champion Whitehead had to wait until the penultimate day to begin another defence of a global crown and got off to a great start in the final of the men’s T61 200m in Dubai.

He was neck and neck with rival Ntando Mahlangu coming out of the bend but the South African, twice a silver medallist behind Whitehead at the Rio 2016 Paralympic Games and then the World Championships in London in 2017, powered away over the final 30 metres to win in 23.23 (+0.7).

"I’ve only raced three times this year so all that said, that’s a performance I’m proud of. Being at the World Championships at my stage in my career, supporting, guiding and mentoring athletes such as Mhlangu is really important.

"Hopefully I’m setting down a legacy for the next generation of athletes because for me, I wouldn’t be out here if that wasn’t the case. Being a team captain I’ve been able to provide the team with some much-needed support and guidance and that’s given me a lot of pride.

"The first 100m was fine, the last 100m because of a lack of races in my legs, wasn’t. Hopefully I’ll be able to come back next year stronger. It doesn’t matter whether it’s bronze, silver or gold, the honour to put on that GB vest is something I take pride in. I left everything out on the track today."

The other Brit in final action on the track, Miller, battled in the men’s T20 1500m but narrowly missed out on a place on the podium on his World Championship debut as he finished sixth.

Miller kept pace with the lead group throughout the early laps and was in medal contention as they strung out during the final 400m. Battling for bronze in the final 200m, the Fife athlete couldn’t quite break into the top three and would place sixth in 3:59.87.

Elsewhere in the first heat of the men’s T34 800m, Towers raced smartly to qualify for tomorrow’s medal showdown and earn a shot at upgrading his world bronze medal in the event from 2017.

With the top three automatically qualifying from each heat, Towers kept himself in contention and made sure of progression around the final bend, positioning himself well in lane two and holding off Canada’s Austin Smeenk to qualify in third in 1:47.79.

Rowlings followed in the second of the two heats and he too comfortably qualified for the final, his second of the Championships in Dubai after placing eighth over half the distance, 400m, almost a week ago on day two.

Raced far slower than the first heat, Rowlings stuck close to Tunisia’s Walid Ktila with only 0.07 separating the pair at the line as the Brit settled for second in the second heat in a time of 1:51.71.

*The WPA Championship marathons took place at the London Marathon earlier this year.

Results can be found on the World Para Athletics website and you can watch live coverage on Channel 4 Paralympic website.