Alfie Hewett and Gordon Reid completed a career Grand Slam of men’s doubles titles on Friday when they won their first French Open title together at Roland Garros with a 7-6, 1-6, (10-3) victory over defending champions Gustavo Fernandez of Argentina and Japan’s Shingo Kunieda. 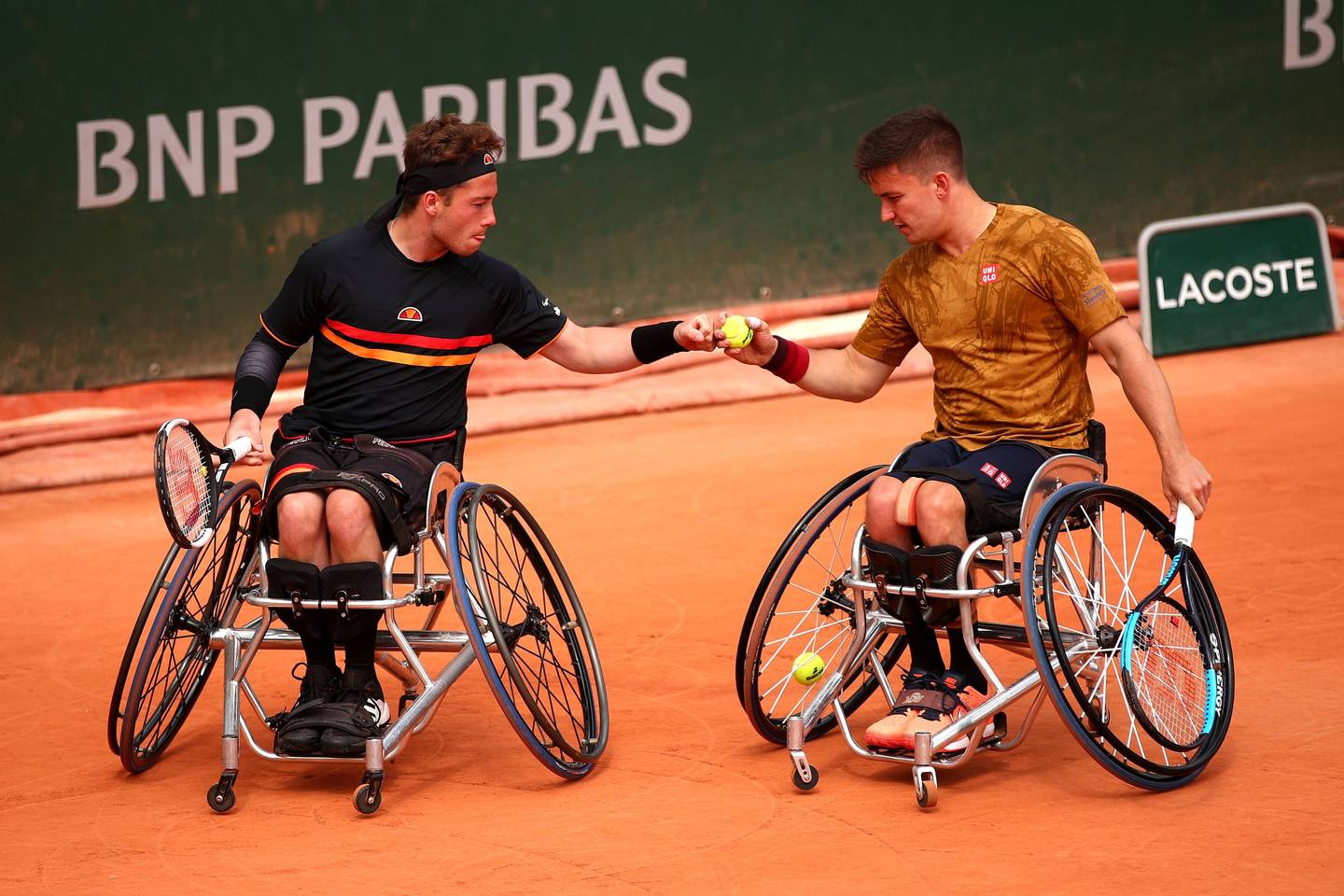 Players on the LTA’s Wheelchair Tennis World Class Programme will bid for three more titles on Saturday after Jordanne Whiley and Yui Kamiji booked a place in the women’s doubles final on the penultimate day of wheelchair tennis competition in Paris.

Hewett and Andy Lapthorne had already confirmed their places in the men’s singles and quad singles final, but Lapthorne’s hopes of winning the Roland Garros quad doubles title ended in a deciding match tie-break on Friday evening.

The Australian Open and US Open champions could not find their way back from 5-0 down in the second set, but they made a much better start to the deciding match tie-break, establishing a 7-1 lead before taking their unbeaten winning streak for 2020 to 16 matches and seven tournaments.

With Hewett and Reid having now earned themselves a return to the top of the men’s doubles world rankings. Hewett said:

“I’m obviously very happy to win the career Slam with Gordon. It’s something we’ve been keeping an eye on for a while now, and Roland Garros has always been that tournament where we’ve not managed to play anywhere near our best. It’s been such a strong year, and we really believed that we could go out there today and get that elusive trophy.

“It could easily have been 6-2, 6-1 to (Fernandez and Kunieda) – they were 5-2, 40-0 up, and playing some pretty good tennis. So, for us to fight the way we did and bounce back so well was quite a turnaround. We’re fortunate enough to have the LTA putting in quite a bit of work with us.

I think that’s a big difference. We work so well as a team.”

“To complete the singles and doubles double would mean a lot. It’s where it all really started for me in my Grand Slam career, back in 2017. The last couple of years, singles-wise, haven’t really been too victorious here in Paris, so it would be incredible.”

“I think the initial sense was of relief after quite an up-and-down match, a lot of twists and turns, and it was quite emotionally draining as well. It means a lot to us as a team, because it was the last Grand Slam that we hadn’t won, and we’re not sure how many more times we’re going to have the opportunity to win it together.

“It’s probably this tournament last year where we got home so disappointed with the way we were playing, so we took a different approach. We committed to spending more time together working on doubles, and I really think that’s showed at the end of last year and the whole of this year.”

Whiley and Kamiji already have great memories of Roland Garros, having previously won the Roland Garros women’s doubles title together in 2015 and 2016. They will bid to make it a hat-trick of titles on Saturday after easing to an impressive 6-0, 6-1 semi-final victory over Marjolein Buis of the Netherlands and Charlotte Famin of France

Playing in Paris for the first time since 2017 after Whiley took maternity leave, the reigning Australian Open and US Open champions dropped just four points as they took the opening set in just 17 minutes.

The second set brought slightly more resistance from Buis and Famin, but Whiley and Kamiji remained firmly in control to set up a title decider against Dutch top seeds Diede de Groot and Aniek van Koot.

Whiley, who has won 11 Grand Slam doubles titles with Kamiji since 2014, said:

“We both feel really good. We didn’t really have any tactics or anything today, to be honest. We just went out and played our own game and that was enough.

“I think Yui’s on a high after winning the singles earlier today and, although I didn’t win in the singles, I still felt like I played well today, so we both feel strong, On clay, with it being a bit slower, it might help us out in the final because it just neutralises the Dutch players’ big hitting.”

Lapthorne and Australia’s Dylan Alcott opened their bid to secure back-to-back Grand Slam quad doubles titles impressively, racing to a 4-0 lead over Dutchman Sam Schroder and the American David Wagner before taking the first set off the same duo they beat to win last month’s US Open.

However, they were unable to build on an early break in the second set and despite having a match point at 5-3 ahead they were ultimately taken to a deciding match tie-break.

From 2-0 down in the match tie-break, Lapthorne and Alcott rallied to move 7-5 ahead, but their challenge started to falter and Schroder delivered a top sin forehand that bounced out of Lapthorne;s reach to complete a 4-6, 7-5, (10-8) win.

“We had a match point in the second set and maybe we could have played that point differently but it is what it is, you can’t win them all and we move on to tomorrow. I was trying to move onto the ball more today and just trying to do what the coaches have asked me to do. That’s what I’ll do tomorrow and hopefully I can play a bit better and get myself into a position to win. I’m the underdog so let’s see what we can do.”

For news and updates from the wheelchair tennis draws and the fortunes of the Brits at the French Open, follow on Twitter @the_LTA and @WChairTennisGB.