The FA Disability Cup will return to St George’s Park on Saturday 17 and Sunday 18 July, with BT Sport providing coverage over the weekend, the first time the Cup has been broadcast live. 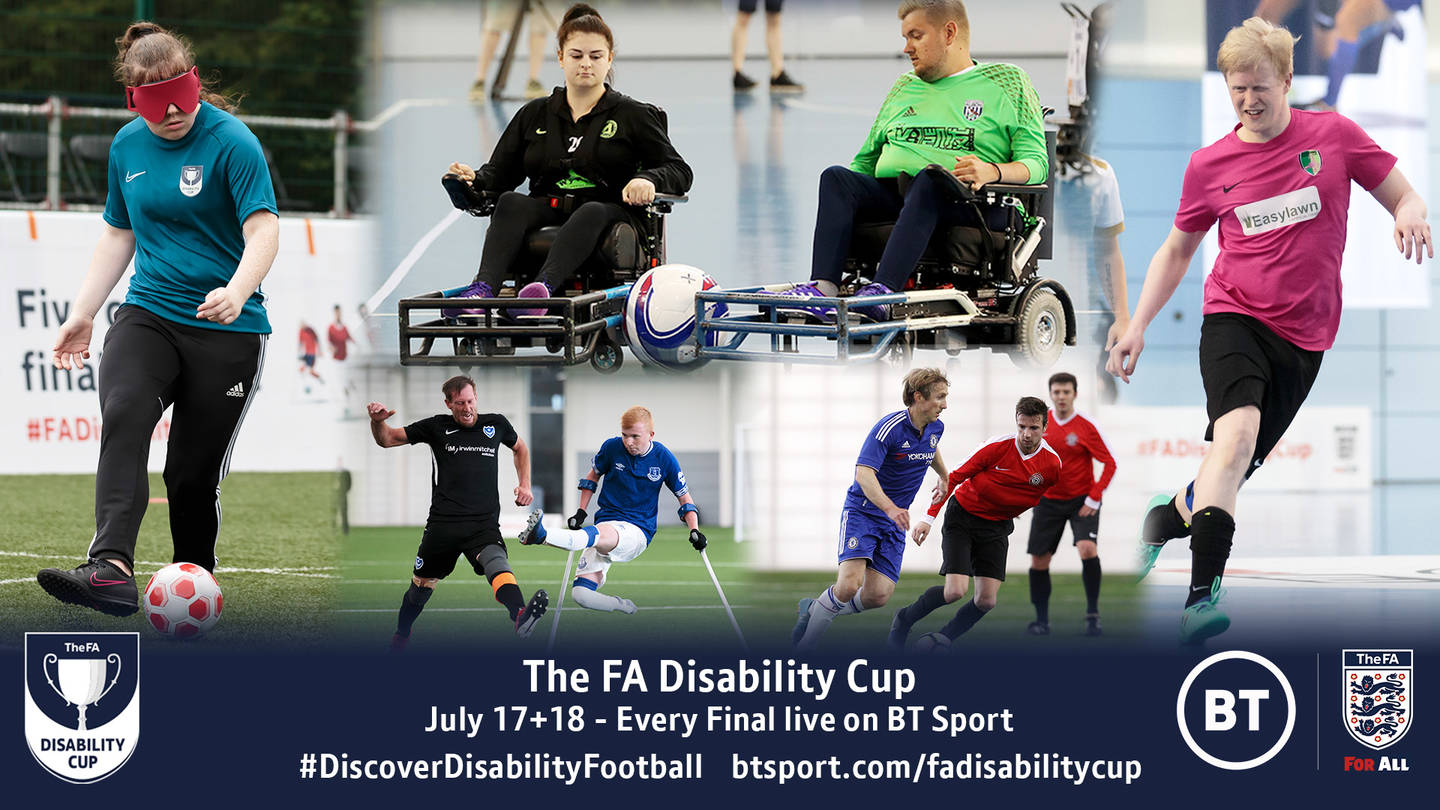 The 2021 FA Disability Cup, the fifth edition of the competition, will see five cup finals scheduled across the weekend, delivered by The FA in partnership with a range of impairment-specific organisations. The Cup is the largest competition of its kind in this country, giving players within impairment-specific football a national competition of their own, complete with dreams of reaching St. George’s Park for finals weekend. BT Sport’s coverage will be presented by Alex Brooker, presenter of Channel 4’s The Last Leg, five-time Paralympic champion Hannah Cockcroft and, BT Sport presenter Jules Breach.

Supporting BT’s lead partnership with the four Home Nation Football Associations, which aims to boost support for disability football, BT Sport’s coverage will be available for anyone to watch without a subscription via BT Sport’s website (btsport.com), its App for mobiles, tablets, smart TVs, media adapters and games consoles, plus, its Facebook channel (facebook.com/btsport). Highlights coverage will also be available on Channel 4, on 25 July, with details announced soon.

The competition will be the most accessible live broadcast of a football match taking place in the UK to date. On each day, live coverage of all the finals will feature on three BT Sport channels with each offering different accessibility features. BT Sport 3 will feature enhanced Audio Description delivered by an expert based at St George’s Park. In addition, BT Sport Extra 1 will carry British Sign Language, with sub-titles available on BT Sport 1*. A fourth channel, BT Sport Ultimate, will provide coverage in up to 4K HDR picture quality.

In addition, BT is using its FA partnerships to provide fans with new disability football content leading up to the competition, through a new mini-series Para Football Adventures, presented by Brooker alongside influencer and Merseyrail FC striker Chelcee Grimes. All five episodes debut on Saturday 10 July at 6.30pm on BT Sport 1, and will individually air as short minute episodes in the week prior to the Cup taking place. The series sees Grimes and Brooker explore:

“This year’s FA Disability Cup promises to be the most exciting yet, with some of the nation’s most successful grassroots teams set to compete to be crowned national champions in their respective disciplines. Disability football is a fast growing and important format of the game so to have all of the action broadcast live on BT Sport is fantastic news and will showcase the talent of all those involved, as well as inspiring newcomers to the sport.”

“BT is proud of its rich heritage in supporting disability sport, having been a founding partner of the British Paralympic Association, sponsor of the 2012 Paralympics and backing dozens of disability sports projects through the BT and Premier League Disability Programme. We are looking forward to bringing fans highly accessible coverage of the 2021 FA Disability Cup, which is set to advance BT’s vision with the four Home Nation Football Associations to provide new opportunities for everyone to enjoy the benefits of football.”

“At RNIB, we are delighted that audio description is coming home for blind and partially sighted football fans. Previously, the best way to feel part of the action was to be in the stadium, but with BT Sport providing live audio description for all five finals of the FA Disability Cup, fans with sight loss can enjoy an enhanced listening experience. We hope this will demonstrate what is possible and inspire other broadcasters to consider offering live audio description for more of their sports output so blind or partially sighted fans never miss that crucial moment, whether it’s a vital goal, winning shot or game-changing action.”

In the 2019 edition of the competition, North West Scorpions won the Partially Sighted Final, while another North West team - CP North West FC - were winners in the Cerebral Palsy Final. In the Powerchair Final, Aspire FC were victorious, while Everton Amputees FC lifted the Amputees Cup and Merseyside Blind & VI FC clinched the Blind Cup.