Gold rush on day two in Tokyo for ParalympicsGB

ParalympicsGB nearly double day one medal total on day two at Tokyo 2020 with 11 medals, including five golds, four silvers and two bronze. Here's a round-up of the medal winning moments from day two. 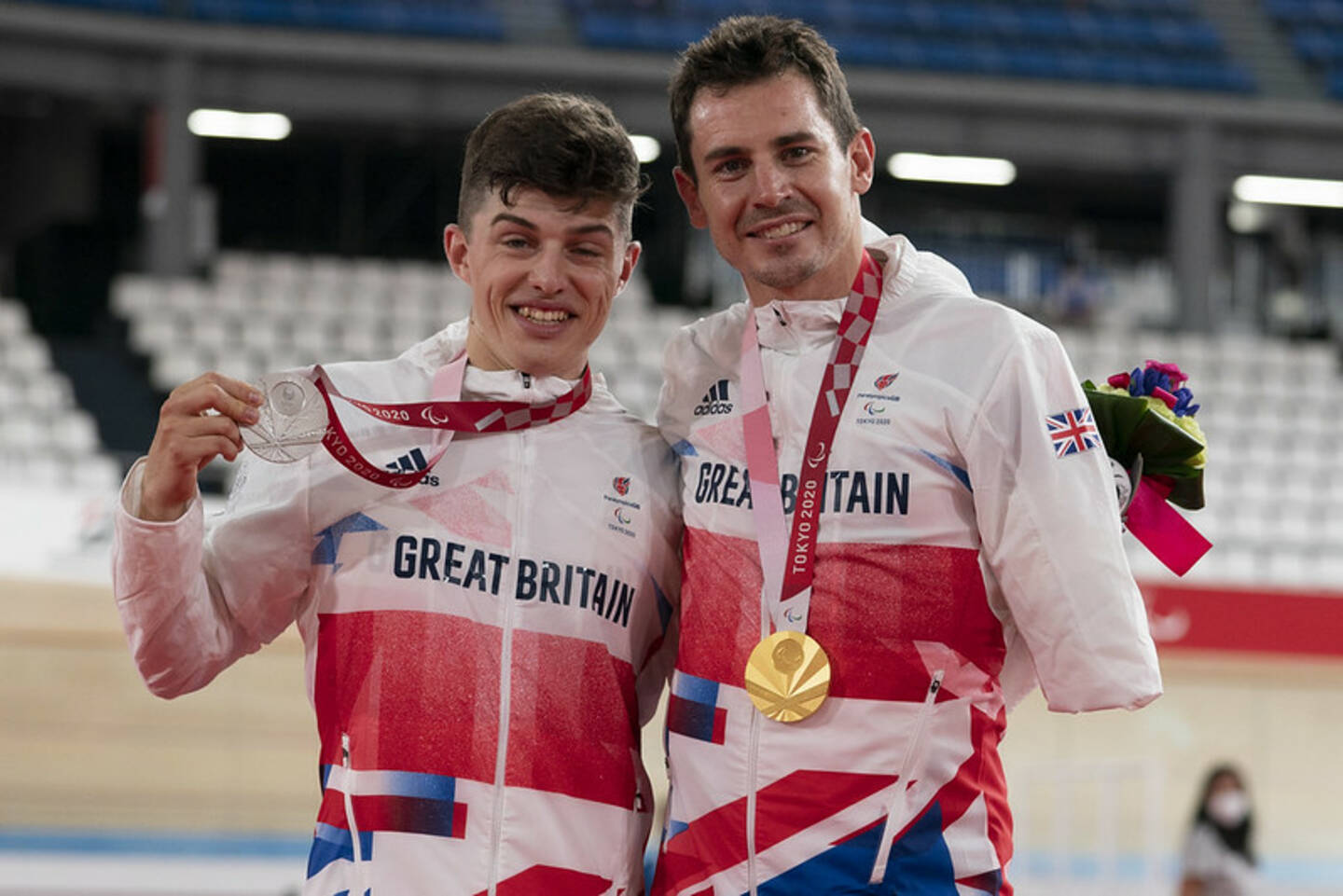 Jaco van Gass smashed the world record and then won gold in the C3 3000m individual pursuit, ahead of teammate Finlay Graham who took silver. In his qualifying ride Graham, just 21 years old, brought down the seven-year world record – the oldest in track para-cycling – with an incredible 3:19.780 in his first Paralympic race. Back-to-back world records meant the pair faced off in the final, with Van Gass taking victory by a narrow margin of 1.13 seconds in a winning time of 3:20.987. (Image above shows Jaco van Gass and Finlay Graham on medal podium.)

Jody Cundy became the first British athlete to win a medal at seven Paralympic Games with silver in the men’s C4-5 1000m time trial. Cundy produced a Paralympic record ride of 1:01.847 when it mattered. Jody said:

"Nobody ever wants to win a silver medal, but I didn’t lose the gold, I won the silver today. It’s the best performance I’ve ever done."

Aileen McGlynn and Helen Scott took silver in the women’s B 1000m time trial. The pair won silver together at London 2012 and got the band back together at 12 weeks’ notice after Sophie Thornhill’s retirement left pilot Scott without a stoker. It all came together and a time of 1:06.743 was enough for Scott’s fifth Paralympic medal and McGlynn’s sixth, the first of which came at Athens 2004.

Kearney and Summers-Newton power to double gold in the pool

Tully Kearney (pictured below) powered her way to the top of the podium with a word record performance in the women’s 100m freestyle S5. The victory erased her disappointment at just missing out in the 200m a day earlier. Kearney knocked almost two seconds off her own world record, finishing 3.41s clear of 200m champion Zhang Li in second. 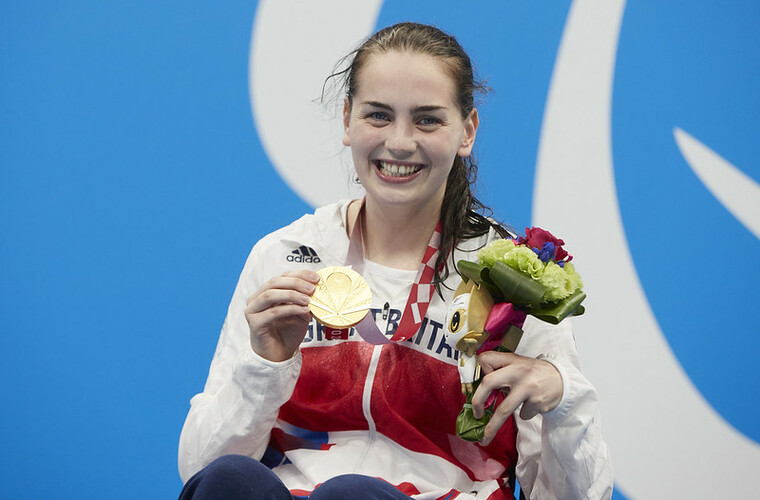 Maisie Summers-Newton notched ParalympicsGB’s second gold of the day in the pool with a dominant second half of the women’s 200m individual medley SM6 final to finish in a world record time of 2:56.68. Eight-time Paralympic medallist Ellie Simmonds – who inspired Summers-Newton to take up swimming with her performances at previous Paralympic Games – finished strongly in fifth, while Grace Harvey was one place further back in sixth.

Sir Lee Pearson (pictured below on Breezer) won a 12th Paralympic gold medal of his storied career while teammate Georgia Wilson bagged a debut bronze. The 47-year-old, who won his first gold medals 21 years ago in Sydney, took victory in the dressage grade II individual test riding on his home-bred horse Breezer. 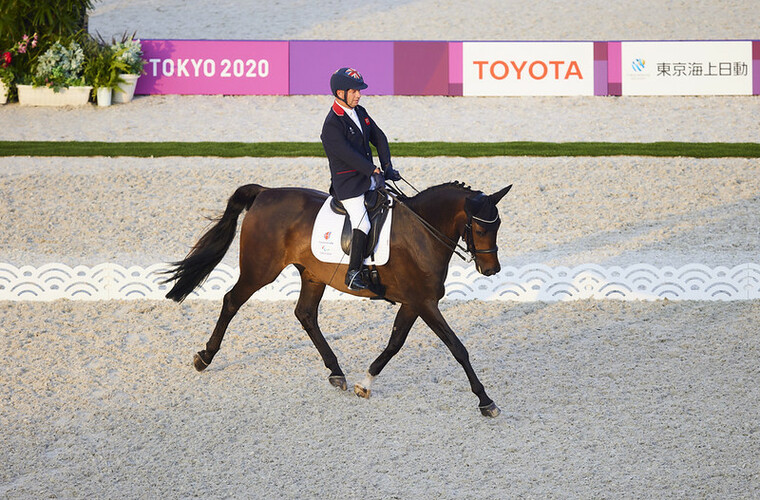 Georgia Wilson, riding Sakura, finished in an impressive third on her Games debut with 72.765 per cent, just two weeks after a late call-up to the squad to replace Sophie Christiansen.

Gilliver a cut above the rest to claim wheelchair fencing gold

Piers Gilliver (pictured below) was left struggling for words after going one better than his Rio silver to claim top spot in the men’s wheelchair fencing épée category A at the Makuhari Messe. After breezing past Artem Manko of the Ukraine 15-2 in the quarter-finals, 2019 world champion Gilliver exacted revenge on China’s Sun Gang 15-6, with the latter having dramatically beaten the Brit in Rio five years ago. And with the gold medal at stake Gilliver kept his composure against the Russian Paralympic Committee’s Maxim Shaburov, romping to a 15-9 win to seal Paralympic glory. 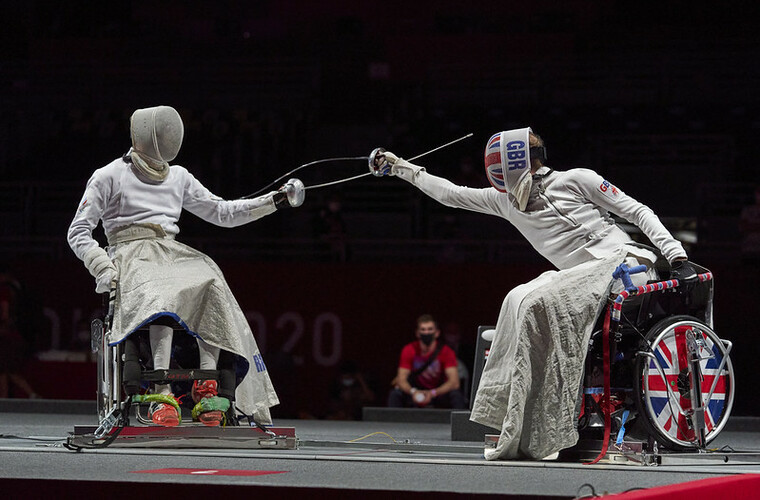 Fellow Brit, Dimitri Coutya, also claimed a medal place in the men’s category B, picking up bronze following 15-11 victory over Belarusian defending champion Andrei Pranevich in the battle to complete the podium.