Activity Alliance enables organisations to support disabled people to be active, and stay active for life. This year, we are continuing to share great stories from both sides – how organisations are working to make active lives possible, and the direct impact their work is having on individual disabled people. Today’s blog comes from keen runner, Dave Williams. He explains how tools such as British Blind Sport’s Find a Guide, is really important in enabling visually impaired people to reconnect with their community. 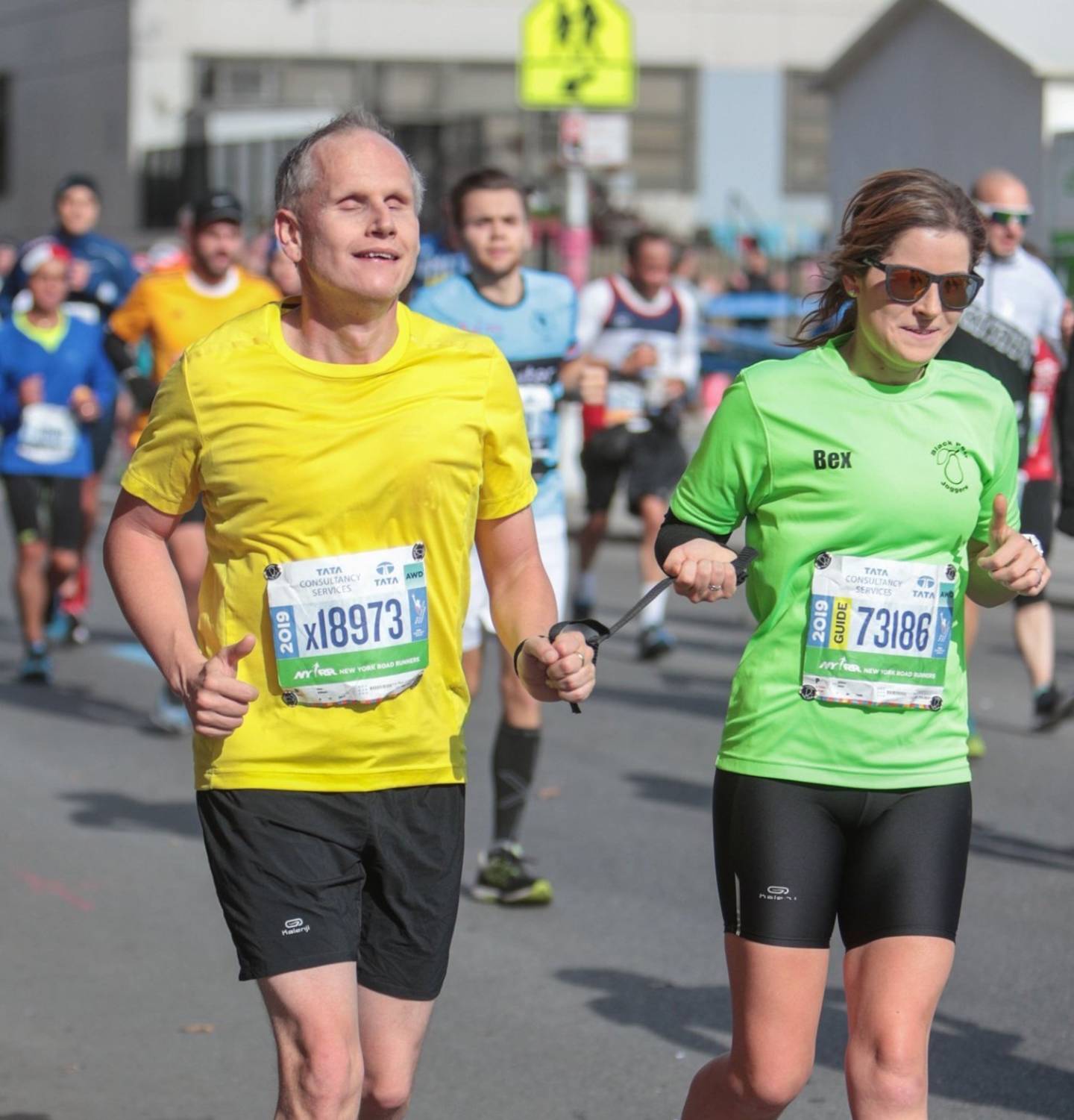 Hi I’m Dave, I live in Worcester, and I love running. My story about getting into running is an unusual one. First I want to tell you that as a child I hated PE. And as an adult I had a pork scratchings addiction, and I also drank a lot of beer. I didn’t really do any physical activity. Working in technology also saw me sat down the majority of the time.

So, my ‘being active’ journey started few years ago when I decided to take up a charity tandem ride in aid of Blind Veterans UK. With the support of my tandem pilot, 100 miles later, I completed the bike ride. It was pretty hard but really rewarding. I carried on with cycling but I wasn’t having much luck with tandem pilots.

I knew of a few blind runners, and although I hated running at this point, my plan was to charm one of their guide runners and convert them to becoming a tandem pilot. I remember doing an internet search for tandem pilots. That’s when I came across British Blind Sport’s Find a Guide database. It houses a list of accredited guide runners. The shortened version is that I failed and I was persuaded into running.

My first guide-runner was Steve, and I found him through the Find a Guide database. He came up as three miles down the road. I sent him a message and honestly thought it was going to be an internet bot. He messaged back asking if I fancied a run that Friday. I still didn’t think this person was real. I called his bluff, and he turned up! And that’s how I went out for my first run.

I was 16 stone at the time, this was about 18 months ago. We walked for a bit and then we would start a really slow jog again. Although to me it felt like I was asked to keep up with Usain Bolt. I lasted about 40 metres, stopped, and then went off again. I didn’t know at the time, but I was doing Couch to 5k. We got back to my house and I told Steve running isn’t for me. He just said he will see me same time next week. And He did, he came back and he just kept encouraging me, and very slowly I got better.

Steve then introduced me to the local running club, the Black Paired Joggers. If I wanted to get better then I needed to run more. So, he put a call out for a guide-runner. This is how I met Bex. She wasn’t a trained guide-runner, she has dyspraxia and didn’t know her left from her right, and spoke with her hands. It shouldn’t have made sense at all but I run with her regularly now. We’ve done about 1000 miles together. She got me into Parkrun, and we’ve done a few of those, and then she got me to my first 10k. I eventually found myself at the start line of the New York City Marathon with Bex guiding me, and my wife and eleven year old son supporting me.

I got a time of just over four hours. I then got a place to run the Virgin Money London Marathon 2020 through RNIB. I also applied via the ballot, and got a place that way too. So, I’m deferring that place for next year. My running friends must hate me because that’s quite lucky!

Running was difficult for me at first. Initially I was worried about how I looked to other people and I did find it was humiliating. But the flip side of this is people telling me I’m looking good, and I’ve lost weight. Sometimes I think there’s this perception that If you’re blind, you don’t care how you look. And you do actually, because we know we live in a visual world.

I now absolutely love running. Of course, some days it’s really easy and some days it’s really hard. However I always feel better after. Even if I don’t have a great run I always feel good because at least I did it. I think there’s a lot to be said to go out running with your club or guide. Otherwise you can feel quite isolated. I find running is a way of reconnecting with your surroundings and people.

Tools like British Blind Sport’s Find a Guide are great too, as it enables you to connect with hundreds of other people in the same situation as you.

My advice to other visually impaired people who want to start running but don’t have the confidence to do so is: Just go for a walk and do five minutes of something that just gets your heart rate up a little bit. You will find you feel better about yourself even if you just force yourself out to walk to the end of the road and back. Every journey starts with a single step, just pick something that’s really achievable for you.

Dave is running two marathons on two continents for the Royal National Institute of Blind People. Read his story on his JustGiving page.